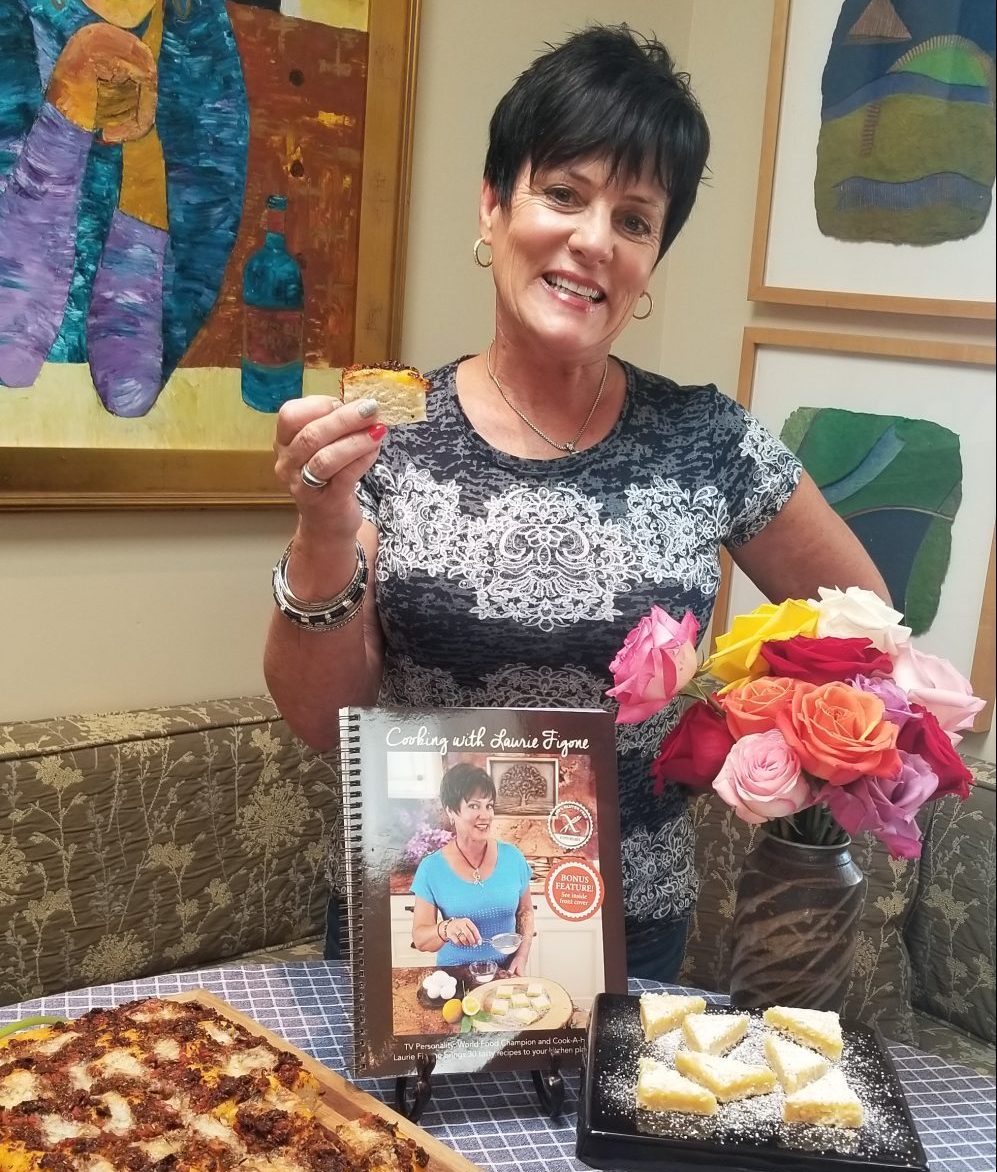 Laurie Figone, a lifelong Sonoma/Marin resident has a career that’s taken her to Scotland where she won a Porridge Championship, to appearances on major TV talk shows and reality shows, to winning a cook-off show in LA. Our local Laurie has worked with: Giada, Emerill, and Ray Lampe, Dr. Barbeque.

I met Laurie at Wine Country Barbeque at the Petaluma Fairgrounds where I had the pleasure of tasting her Fingerlickin’ Ribs.
I kept her card, and recently followed up to share her career story with you.
Laurie, what exactly do you do as a celebrity chef?
Joan, my work is multi-faceted:
– recipe developer
-brand ambassador
– TV personality
– cookbook author
– cook off competitor
-food judge
Laurie is a self-described  cookaholic.   She’s been involved in all aspects of the world of cooking since growing up on a ranch in Novato. Her family used everything from their garden, orchards and fields, including foraging for mushrooms in the hills. She took a hobby and went professional with it at the prompting of friends and family. One thing led to the next. “It’s not a typical 9-5 job. One day I’m developing a recipe, and the next day I am a judge at a cooking competition.”  Laurie is comfortable on both sides of the stove.
For three years she was the featured chef on KTVU TV, Oakland. She had enjoyed free rein and loved developing creative recipes using local ingredients. “I love using and promoting our fine local deliciousness, from local cheeses to meats, eggs, produce, even local beer and wine.”
Laurie was the featured chef at the Sonoma County Fair for three years doing several demonstrations a day and inviting local growers on to the stage with her. She loved connecting with the local community.
“I think myself as a real pioneer, cooking and eating seasonally since the 1960s.  In those days most Americans were eating out of cans and preparing frozen dinners.”
When Laurie enters big competitions, such as the World Food Championships, she competes with home cooks and professionals from all over the world.
In 2014 she was the world dessert champion with her King Cake meets Banana Fosters meets Pecan Praline. With the competition in Las Vegas she actually had duck eggs flown in from Petaluma! (She is a stickler for using the best possible ingredients) She won the top prize of $10,000!
What are the most rewarding aspects of your celebrity chef career?
I love to share my love of cooking with others. I love seeing my first cookbook in print, and getting feedback from readers who are successful with the recipes.  I love teaching myself new techniques and combining ingredients in innovative  ways. And I adore the adrenaline flow that comes with being in the competitions.
What are some of the challenges of your profession?
It feels great when you’re a winner of thousands of dollars, but oftentimes the expense of competing can eat up much of the winnings.
It’s a career that has its highs and lows and it is very physically demanding. This career involved a lot of travel which can be stressful to family life.  And it can involve cut-throat competition.
How would one follow in your footsteps?
There are several roads to getting here. Mine was a unique and personal journey that didn’t involve special schools or certificates.
I was born into the opportunity (on the farm) and had encouraging parents. I called the kitchen my playground, and clearly have keen passion for food and cooking.
Some people go directly to culinary schools like the Culinary Institute of Napa, or  start out with cooking classes at Santa Rosa Junior College.
It  is a career that takes tremendous passion, talent and a stomach for very hard work, determination and little guaranteed income.
For readers interested in finding food competitions go to the web site:
www.contestcook.com.
What is your personal philosophy or approach to being a celebrity chef?
Laurie’s mantra is  ‘What do I have to lose? I have everything to gain and nothing to lose’
She loves preparing dishes and watching people enjoy eating them…even if they are not contest-winning recipes. Her family and neighbors have been her tasters.
Important to know, too, is that to  win a competition your food needs to taste great and look great. Some dishes don’t look so great but they are fantastic to eat. Laurie learned the hard way that they have to be the best in both dimensions to win. Food for the eyes and for the mouth.
I am a strong supporter of  local growers. Their products taste the best. We are so fortunate to live in a place with such natural bounty!
————————————————
Laurie is clearly a unique combination of entrepreneur and performer, with a foundational love of food and cooking. You can learn more about her at www.lauriefigone.com
Onward in the career of celebrity chef,
Coach Joan
By Joan Tabb| 2019-08-21T22:27:25+00:00 July 31st, 2019|0 Comments